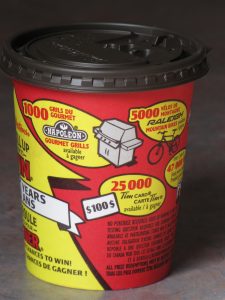 If you ever participate in their Roll-Up-the-Rim-to-Win contest, you will notice the numbers on their disposable coffee cups do not have commas to indicate thousands.

This is the metric way of writing numbers and also the international style. Canada went metric in the 1970s with the disclaimer that it was phasing in the metric process. Now some organizations and provinces are encouraging the rest of the phase-in.

Under the metric system, large numbers are not separated by commas but are written as groups of three with a space separating each group. A four-digit number may be grouped together:

When it comes to dollar amounts — according to international style — a comma is used to replace a decimal point and the currency symbol is placed after the amount.

Note: Quebec fully adopted the international standard in the ’70s, and metric measures are more consistently used there than anywhere else in Canada.

Will Canada ever go completely metric? I don’t know. The CP Stylebook still uses commas rather than spaces. However, in Ontario the commas have been removed from many of the blue population signs. And many elementary school teachers are teaching the international method.

I would love to hear what is happening in other provinces, the U.S. and other parts of the world.